How to plan effectively for crisis communiation

A crisis is the severest test of any organisation’s administration, morale and public profile. At the height of a crisis, it can be tempting to deal with the problem first and only later think about how to communicate it. This mistake has humbled some of the most admired firms in the world: Coca-Cola, BP, Malaysia Airlines and Mattel have all seen sales and share prices fall dramatically when weak crisis communications undermined their public credibility.

Let’s walk through the steps to consider when developing your crisis plan.

Is it an issue or crisis?

Is it an issue that needs to be strategically dealt with, or is it a real crisis? This is often a question we get asked in training or when advising clients. ISOC’s trainer, Philip Dewhurst always says that “an issue becomes a crisis when the media find out about it.” It can be as simple as that, because once it’s in the media, it becomes crisis management mode for the organisation. Philip Dewhurst speaks more about this in his ISOC video interview.

Managing your reputation in a crisis

The most famous historical example is pharmaceuticals firm Johnson & Johnson, who reacted well when saboteurs tampered fatally with their Tylenol painkiller. The company withdrew all stocks from the marketplace and explained, fully and immediately, what they were doing and why. Sales of Tylenol fell sharply at first, but recovered a year later when new, tamper-proof packaging was adopted. Most tellingly, J&J’s share-price held steady throughout the crisis and afterwards.

There are numerous stakeholders whose faith and good opinion is crucial in a crisis, but the media assume unprecedented importance when things go wrong. Media attention is intense, large-scale and unrelenting when reporters scent a crisis, and the sheer pressure of their search for the latest news in the story can take management by surprise.

There is only one way to survive unscathed: managers must seize the initiative and control communications proactively during the media frenzy. This cannot be done without thorough preparation and a crisis management procedure which everyone knows and understands.

It is impossible to foresee every single potential threat to an organisation’s reputation, but the main categories of risk can be methodically identified and monitored. This is called Issues Management, and all large organisations do it. Organisations spend a lot of time working on this, but to put it simply, organisations will often take the following steps:

(2)       Assess the comparative likelihood of the problems.

(3)       Estimate how much damage to your organisation’s reputation the problems could cause.

Having identified the most likely and damaging crises that might strike, examine the sources or causes from which they would emerge. These are typically either direct or indirect causes.

Successful crisis management is all about staying calm, professional and in control when a disruptive event occurs.

What’s difficult about this is detecting when an ongoing issue is on the point of turning into a crisis which demands action. PR people are well-placed to advise on this: most issues feature on social media or minor media before they reach the main front pages. However, it is always good to be cautious and warn management that an issue might turn into a potential crisis, rather than waiting until it becomes a damaging headline in newspapers.

Taking precautions: minimising the impact of a crisis

By far the best protection against negative impact in a crisis is a strong reputation among media and stakeholders. If opinion-formers know your organisation, are on personal terms with its executives and PR people, and understand its high standards of conduct, they will listen to what your organisations says, and will be inclined to give it the benefit of the doubt in a crisis.

An organisation is always judged on how well it communicates in a crisis, and these impressions will remain with outside audiences long after the details of the crisis itself have been forgotten. 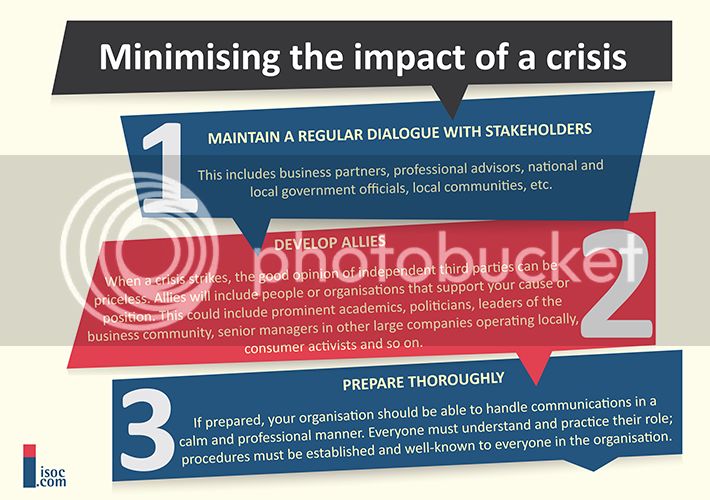 This article draws on content from ISOC courses on crisis communication.